A mom in Rochester, New York is furious with a designer for charging her $300 for her daughter's prom dress, which didn't really turn out too well.

Malexa Maeweather found the perfect dress on Instagram but it wasn't available, so her mom, Dee Lewis, turned to a local designer to create one. For a $100 deposit and $200 more upon deliver, the designer promised to create a dress using material she already owned.

The designer unveiled it to Malexa on prom day and after trying it on, the teen was devastated. Her mom demanded a refund but the designer refused. Dee posted photos of the dress on Facebook, asking followers if she was wrong asking for her money back and got lots of support. 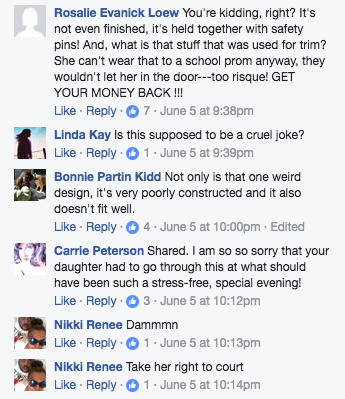 Thankfully, Malexa was able to borrow a dress her mom's friend's daughter wore the previous year.